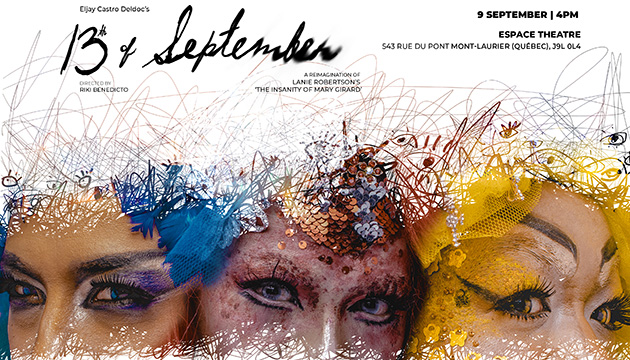 The Philippines has an entry to the 9th Festival International de Théâtre de MontLaurier in Quebec City.

It’s a play titled “13th of September”, which will be performed during the festival that runs from September 5 to September 11.

“13th of September” is produced by the Manila-based Be Our Guest Theatricals, a group that aims to elevate Philippine theatre on the world stage.

A media release noted that the play is a fresh take on “The Insanity of Mary Girard”, a work by American playwright Lanie Robertson.

Robertson’s 1979 play focuses on the story of the wife of an 18th century Philadelphia financier. After years of a childless marriage, Mary becomes pregnant with another man. She was committed by her husband to a mental asylum, where she would die after many years.

One evening, Mary was visited by furies or spirits of vengeance, who speak as people from her past.

It’s a play that takes a look at issues of male chauvinism, class conflict, and stigma of mental illness.

The media release for “13th of September” stated that playwright Eljay Castro Deldoc and dramaturg or literary consultant Drew Espenocilla want to “illustrate the ‘present-time Mary Girards’ as victims of a harsh society”.

According to the release, it’s a society “whose leaders are oblivious to the horrendous truth – that the Philippines is living within a culture that emphasizes resilience and humor amid suffering and pain making it difficult to talk about mental illness where you have no other choice but to be strong – both mentally and emotionally”.

“They regard that, as people, we put so much importance in being able to roll with the punches, almost to the point that it’s a requisite to master how to laugh in the face of misfortune,” the media release explained. “This is why, despite the growing call to recognize mental health as a legitimate public health concern, initiatives to resolve this remain limited.”

Play director Riki Benedicto is no stranger to international stages, including Canada.

The media release quotes Benedicto as hoping through the “13th of September” to “challenge society’s restrictive definition of sanity, gender and sexuality or even your perception of truth”.

Three actors perform the roles of the furies: Adore Dominguez, Marco Edward Calilao, and Paolo Rodriguez, who are all seasoned performers.