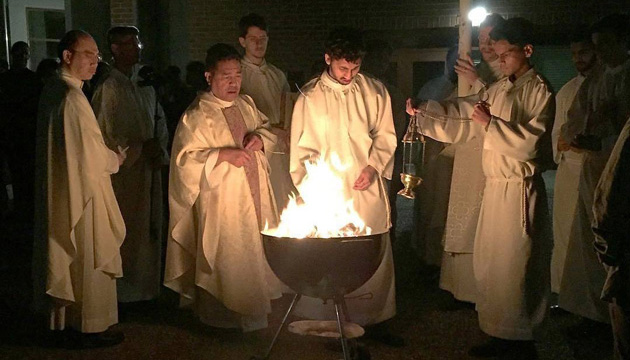 (Editor’s note: Since our April 1-15 edition is coming out on Easter Sunday, Canadian Filipino Net wishes to greet our readers A Happy Easter with an article about the observance of Holy Week by one of the most active Catholic parishes in British Columbia with a significant number of Filipino parishioners.)

The Immaculate Conception parish in Delta, British Columbia started this Lent season five days before Ash Wednesday to prepare the congregation through a series of talks for reflection. This year the talks, from February 10 to 14, were conducted by Fr. Eugene O’Reilly, a well known inspirational speaker and Redemptorist priest from Toronto.

Rev. Amador M. Abundo, pastor of Immaculate Conception, explained how his parish is celebrating the Lenten Season beginning with Ash Wednesday on February 14 and culminating with the Holy Week from Palm Sunday on March 25 to Easter Sunday on April 1. “We try to get everybody to share in the passion of our Lord in the spirit of penance on Ash Wednesday and in celebration of our Risen Lord on Easter Sunday,” he said.

Fr. Abundo has been in Canada for 22 years now and has served in four different parishes in the Archdiocese as assistant pastor and pastor before he was assigned as pastor for Immaculate Conception in 2014. He is well known to many Filipinos and is the first Filipino priest to be incardinated in the Archdiocese of Vancouver.

Observance of Lent in BC
On Ash Wednesday which fell on February 14 this year, ashes were blessed and imposed on the foreheads of the faithful with a sign of the cross to remind them that “you are dust and to dust you will return”. During the 40 days of Lent, Catholics were encouraged to fast, give up something that they enjoy such as meats on Fridays and offer other personal sacrifices. They were also urged to give more time to prayer and charity before the celebration of Easter.

Holy Week started on Palm Sunday or Passion Sunday, March 25, to celebrate the triumphant entrance of Christ into Jerusalem before his impending death on the cross. Before Mass, palms were distributed to the parishioners who carried them in a ritual procession into the church. The priest blessed and sprinkled the palms with holy water. Many people fashioned the palms into small crosses or other items of personal devotion to take home.

Fr. Abundo explained that the readings and Gospel for Palm Sunday Mass were long because they covered the complete narrative starting with the entrance of Jesus into Jerusalem riding on a donkey and being welcomed by adoring crowds and ending with his arrest, trial and crucifixion.

On Wednesday, March 28, all priests in the Archdiocese of Vancouver, participated in the Mass of Chrism, celebrated at the Holy Rosary Cathedral with Archbishop Michael Miller as celebrant and concelebrated by diocesan priests and religious from all parts of the Archdiocese. It was a sign of unity and communion of the priests with their bishop. The priests renewed their vows and the Holy Oils were consecrated.

On the evening of March 29, Holy Thursday, the three gifts Jesus imparted to His beloved bride, the Church, were celebrated: the Priesthood, the Eucharist (Mass of the Lord’s Supper) and a love that is stronger than death.

At the Immaculate Conception parish, Fr. Abundo reenacted the washing of the feet of 12 disciples by Jesus as a sign of love and humility. Twelve members of the parish ministries and organizations were chosen to serve as disciples. After the mass, the faithful might stay for the Adoration of the Blessed Sacrament until midnight or join a group for “Visita Iglesia”, visiting and praying at seven nearby churches and then back to the parish for prayers.

Good Friday, March 30, was quiet at the Immaculate Conception Church as parishioners came for morning prayers at the church. There was no Mass but school children made the Stations of the Cross joined by parents and other parishioners in the morning. In the afternoon at 3:00 pm, the parishioners attended the Liturgy of the Passion of the Lord, the veneration of the cross and communion followed by the Novena to the Divine Mercy. A similar service was conducted at 7:00 pm for the parishioners who did not attend the first one. After the services, the veils covering the crosses in the church were removed while the veils covering the images were removed before the Easter Vigil. The parishioners were encouraged to observe fasting, abstinence and meditation.

As Fr. Abundo explained, the focus of Holy Saturday, although there was no Mass and the altar was left bare, was the Easter Vigil which began at 9:00 pm with four distinctive stages: Service of Light, Liturgy of the Word, Liturgy of Baptism and Liturgy of the Eucharist. The New Fire and the Paschal Candle were blessed. The Paschal Candle is the central symbolic object in the celebration of the Vigil Liturgy because it represents the Risen Lord in His glory. As part of the service, the people who completed the Rite of Christian Initiation of Adults (RCIA) course were baptized and confirmed. They were received into full communion with the Catholic Church.

Easter Sunday, April 1 is a celebration of Christ’s resurrection from the dead. A new activity, not normally done in Canada but is a tradition in Catholic churches in the Philippines, was introduced in the parish three years ago and is now part of the Easter Mass at Immaculate Conception parish. It is called “Salubong,” or the meeting of the risen Christ with His grieving mother Mary. It starts with two separate processions coming out of two separate church doors at 7:30 a.m., one hour before the Mass. One procession with the statue of the Risen Lord is accompanied by men. The second procession of the Virgin Mary wearing dark clothes and a dark veil is accompanied by women. Although the two processions head off in different directions, they eventually meet up in front of the church where there is a high platform from where a child dressed as an angel lifts the mourning veil of the Virgin Mary as she meets up with the Risen Christ.

At the precise moment that the veil is lifted, the lead angel joined by a chorus of other angels sing alleluias and the celebration begins with the pealing of church bells. The devotees experience a certain joy – a share in the gladness of Blessed Virgin Mary upon meeting her son who has come back to life. Her tears of sorrow turn into tears of joy and a cause for celebration for those joining the procession and all participants.

This ritual of Salubong has been well received by all Delta parishioners, Filipinos and non-Filipinos alike – a beautiful Filipino religious and cultural tradition that serves as a contribution to Canada’s diverse society. A glorious Easter Mass at the church immediately follows the “Salubong” procession. 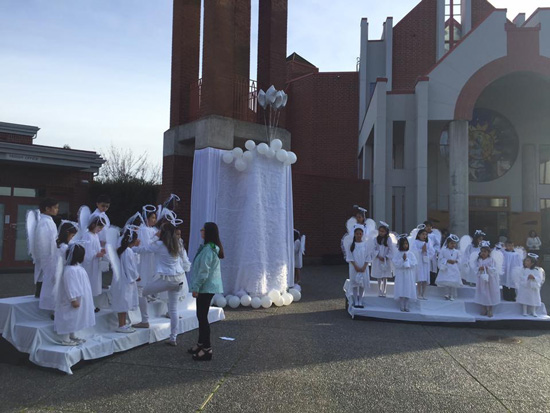 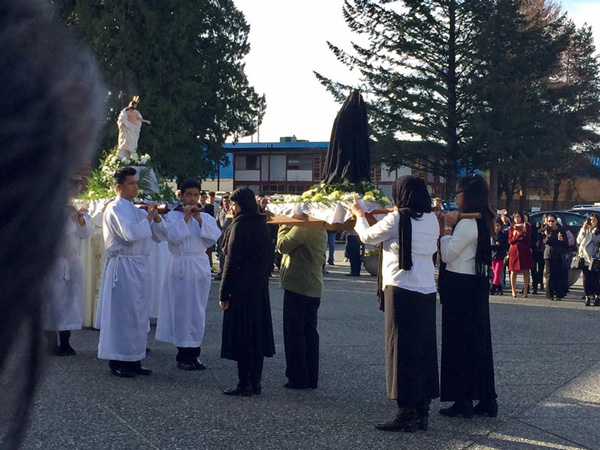