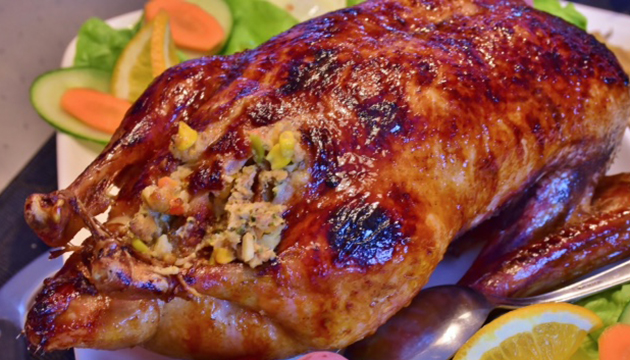 Luming was known as the “Pride of Pampanga” among Filipinos in Ottawa in the 1970s. She was well known for her extraordinary and uniquely creative Pampanga cuisine. The province itself is famous for its sophisticated and richly sauced meat fares and stuffed dishes like rellenong manok or bangus or pata (stuffed deboned whole chicken, milkfish or pork hocks), morcon (stuffed rolled beef) and embutido (pork sausage stuffed with hardboiled eggs and pepperoni).

But Luming took Pampanga cooking to an enviable culinary height in the Ottawa valley. Her dinner parties were memorable and an invitation to dine at her house was highly coveted. My own unforgettable Luming dinner was a Thanksgiving without turkey.

As usual, Luming’s dinner menu was carefully chosen from her large array of tried and tested delectable dishes – from appetizers to desserts. But for me the most unusually delicious dish was her stuffed roast duck with its Peking Duck-like crispy golden skin and Bringhe-like sticky rice stuffing. I have not had anything like it anywhere before. Maybe the duck itself made the difference. Luming said she bought her duck from a farmer at the Byward Market who had a duck farm and also sold duck eggs for making itlog na maalat (salted 30-day old duck eggs).

Since I was an amateur cook at that time and eager to learn something new and challenging, Luming gave me her duck recipeto try. My first attempt was so successful that I included it in my cookbook along with galantina (stuffed rolled chicken), stuffed peppers, eggplant, sayote and other vegetables big enough for stuffing. Anyone with patience and time for the many minute details of this recipe will reap its delicious rewards.

1. If duck is frozen, thaw in the refrigerator for 24 hours or more as needed. Drain dried mushrooms, discard stems, diced. Chop drained dried shrimps until fine.

2. Wash thawed duck and pat dry with paper towels. With a sharp knife, cut an opening on the duck’s back, carefully remove the carcass from the skin but leave a layer of meat on the skin to keep the skin intact. Sprinkle the duck shell inside and out with 2 tbsp lemon juice and 1 tsp salt. Set aside. Put meat and bones in a pot, cover with water, simmer until meat is tender, skim off foam. Save for future use.

3. Prepare the filling: Line steamer rack with a double layer of paper towel. Spread rice evenly on a paper towel, cover pan tightly and steam for 30 minutes or until rice is tender. Set aside to cool.

5. Stuff filling loosely into duck, do not pack. If you don’t have enough filling, fill up the space in the middle of the cavity with two hard boiled eggs, shelled whole.

6. Sew duck’s opening, neck and bottom. Place duck, breast side up, on the rack of roasting pan. Add 1” hot water in roasting pan under rack. Roast in a 400°Foven for 30 minutes, reduce heat to 350°F and continue roasting for 1 ½ hours.

7. Combine basting ingredients of honey, soy sauce and garlic powder. Baste duck every 30 minutes. Check the water in the pan after each basting and add more if needed to keep it at 1” level. Do not allow pan to dry up. Baste one last time immediately after taking duckout of the oven. Let stand 30 minutes before carving. Serve with pride and enjoy your reward in praises from happy diners.