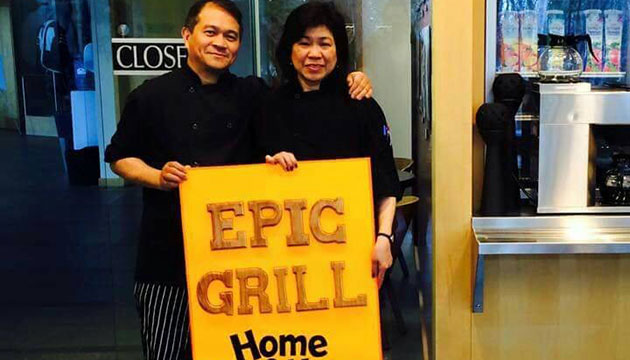 Filipino food has become mainstream in the Northwest Territories, a fare served to top politicians in the territory.

Here’s what the website of the territory’s legislature has to say about its official caterer: “The Epic Grill, the café at Legislative Assembly building, offers Filipino cuisine distinguished by its bold combination of sweet (tamis), sour (asim), and salty (alat) flavors.”

“Other offerings include soups, sandwiches, salads, desserts and specials. Ask about the Silog – a breakfast specialty combining meat with eggs and rice,” the website notes.

The Silog is of course the popular Filipino food of fried rice (sinangag) and itlog (fried egg), which goes well with tapa (beef jerky), longanisa (sausage), tocino (sweet pork), or any meat or fish dish.

Owned by couple Joselito and Dorothy De Leon, Epic Grill moved into its 28-seat space at the government building in the capital city of Yellowknife in April 2015 after winning a two-year contract, according to Northern News Services.

“We're not bringing this just for the two of us," De Leon told Northern News Services. "It's for all the Filipino community."

For her part, Dorothy said: "It's an honour and a pleasure to serve the Government of the Northwest Territories. We have a commitment to them to do our best."

Epic Grill first opened in Yellowknife in 2014 at the Arnica Inn. The establishment sought to bring a taste of Filipino cuisine to the city with its Silog offerings, including one that includes bangus (marinated milkfish).

De Leon used to be a cook at the Shangri-La Hotel in Makati, Philippines. Dorothy is a pastry chef.

According to myyellowknifenow.com, the De Leons came to Vancouver in the 1990s. They moved to Yellowknife in 2012.