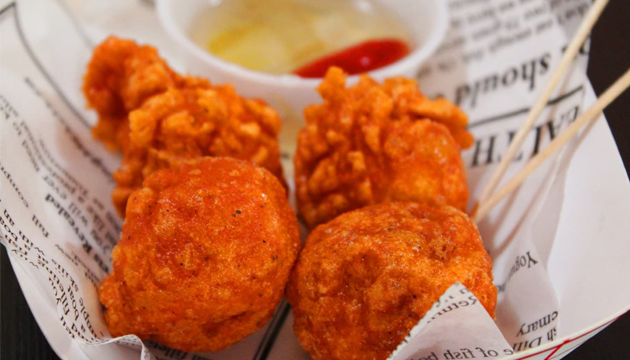 This is why street food vendors are found almost everywhere in cities and towns in the Philippines, especially where there is a lot of foot traffic like public places and transportation hubs.

For Filipinos who grew up in their native country and are now living abroad, it’s rare for them to get a taste of authentic Filipino street food.

One Greater Toronto Area (GTA) restaurant has been filling that hunger for more than five years.

The eatery’s name is a dead giveaway of its specialty, and it’s called Eskenita Foods, from the Tagalog word “eskenita”, meaning street alley.

Eskenita Foods opened in 2017 at 180 Steeles Avenue West in Thornhill, a community in the City of Vaughan.

One can also get kikiam, a sausage-like meat snack of Chinese origin.

To quench your thirst, there’s the classic samalamig, a mix of agar jelly, ice, and brown sugar syrup.

Filipino street food is not complete without fish ball, and Eskenita Foods offers eight pieces for $4.50.

Pork barbecue on a stick is another classic Filipino street snack.

For the more adventurous, one can order isaw, pork intestine grilled in a stick, and barbequed pork ears.

Filipinos are creative with naming their street foods, and a good example is Adidas, which is chicken feet. This is found as well at Eskenita Foods.

There is also taho, silken tofu dessert. And for the hardcore, Eskenita has iskrambol or ice scramble, shaved ice, condensed milk, topped with powdered milk and chocolate syrup, and served in pink colour.

A report by the Toronto digital publication blogTO recalls that Eskenita Foods joined the metropolis’s food scene as a food fair vendor in 2016.

In a previous account, the Philippine Canadian Inquirer related that couple John Paul Abejo and Ana Clariz Inarda first noticed in a Filipino festival back in 2015 that there were no vendors selling authentic street foods from the Philippines.

“Considering the large Filipino community in Toronto, John and Ana thought it would be a good idea to put up a restaurant in GTA that caters mostly Filipino street foods,” the paper noted.

The publication also recalled that the restaurant opened in September 2017.

Online, Eskenita Foods says its “main concept is to showcase Authentic Filipino street food that is cooked per order to maintain freshness”.

“Our main goal is to cater to our Filipino community and make them ‘feel at home’ and make them feel nostalgic when they eat our food,” the business states.