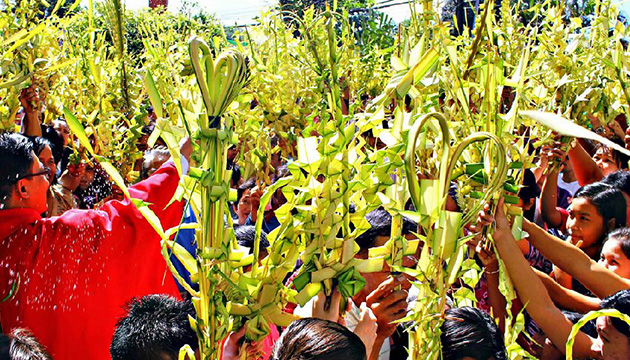 The 40-day period of Lent begins on Ash Wednesday with 1.2 billion Catholics around the world observing the season which culminates in Easter Sunday.

The Philippines is the most Catholic country in Asia with over 80 per cent of its more than100 million population belonging to the Roman Catholic faith. Here Ash Wednesday is a significant religious event.

February 14, 2018 was not only Valentine’s Day but also Ash Wednesday for Catholics the world over. At the EDSA Shrine, Mary Queen of Peace parish in Ortigas Center in Manila, Lent started with a bonfire in the church courtyard. The ritual called Silab-Sala, literally means burning of sins so that the faithful may share the passion of Christ with cleansed hearts.

On the day before Ash Wednesday, parishioners were asked to bring to church the blessed palms from last year’s Palm Sunday for burning in the church courtyard. The ashes were used on Ash Wednesday to mark the faithful with the austere symbol of a cross on their foreheads as a sign of conversion, penance, fasting and human mortality. People leave the marks on their foreheads all day as a witness to their faith. Far from being a merely external act, the Church has retained the use of ashes to symbolize that attitude of internal penance to which all the baptized are called upon during Lent.

Abstinence from eating meat is observed on all Fridays during Lent starting on Ash Wednesday. This applies to all persons 14 and older. The law of fasting on Ash Wednesday and Good Friday applies to all Catholics from age 18 through age 59. In the Philippines, restaurants and other eateries serve meatless menus on those days. In all Masses during Lent the Alleluia and the Gloria are suppressed until Easter.

Holy Week: A Time of Sorrow and Joy
Palm Sunday this year is on March 25 marking the beginning of Holy Week. People go to church carrying young coconut palms woven into many decorative designs and shapes for the priest to bless. After the Mass the palm fronds are taken home and placed on front doors or windows supposedly to ward off evil spirits. Because they had been blessed they may not be disposed of like trash. They are burned in the parish courtyard for use on Ash Wednesday.

The observance of Holy Week in the Philippines is not only an opportunity for Filipinos to showcase religious rituals, but also their artistry and ways to make extra money by transforming young coconut fronds into works of art called “palaspas” for sale. With adept hands, they clip, twist and shape the fronds into birds, flowers, butterflies, hearts and crosses that seem to float in the air when they shake the palms as they are blessed by the priest on Palm Sunday.

One of the most important Holy Week traditions in the Philippines is the Visita Iglesia (Spanish for church visit). Throughout the day, worshipers pray the Stations of the Cross inside or outside the church, while at night after services, the faithful may also pray before the Blessed Sacrament at the Altar of Repose.

Caridad or Pakaridad in thanksgiving for a prayer granted is no longer widely practised. It is a way of giving or sharing food (usually guinataan, suman, or gulaman and sago) to the neighbors or to the local church or chapel to be given to the crowds of people who visit the churches or attend the Good Friday procession. A complimentary drink of water is also given by local residents living along the processional route.

Good Friday is the most sombre day of Holy Week. Businesses close and fasting and abstinence are more strictly observed. It starts in the early morning hours with the pabasa, a continuous chanting of the Pasyón (the Filipino narrative of Christ's life, passion, death, and resurrection in verse) in churches, makeshift chapels or homes of people who had made a vow to do this in return for a favor granted or received. It concludes at 3 pm the time Jesus is said to have died.

Television and radio stations also air Siete Palabras (Seven Last Words) services from large churches in Manila, usually beginning at noon and ending at 3. Then the altars are stripped bare and people go home in silence but return in late afternoon for the Santo Entierro (holy internment) procession. All church bells remain silent until pre-dawn of Easter Sunday.

The usual highlight of Good Friday is the Santo Entierro procession with the statue of the dead Christ followed by images of saints connected to the Passion of Christ. The image of the Virgin Mary, dressed in black and gold as the mourning Mater Dolorosa, is always the final image in this procession.

Easter Sunday typically begins with a pre-dawn celebration known as Salubong or meeting wherein statues of the risen Christ and Mary are taken to meet one another. Men typically accompany the statue of Christ, and women, accompany the statue of Mary. The meeting is an occasion for joy and celebration. The moment is announced by church bells pealing, choirs singing and brass bands playing. Children jump up and down as high as they can when they hear the church bells on Easter morning in the belief that they would grow taller.

Holy Thursday and Good Friday are national holidays. Many Filipinos take the whole week off. Television and radio stations all turn to religious programming in place of regular shows. Black Saturday as it is typically called in the Philippine is a non-working holiday. Easter Sunday is not an official holiday, but it is fully observed. This long weekend is about the only time in the year when the major streets of Metro Manila are deserted as people go to their hometowns in provinces to celebrate the Holy Week in cooler weather.