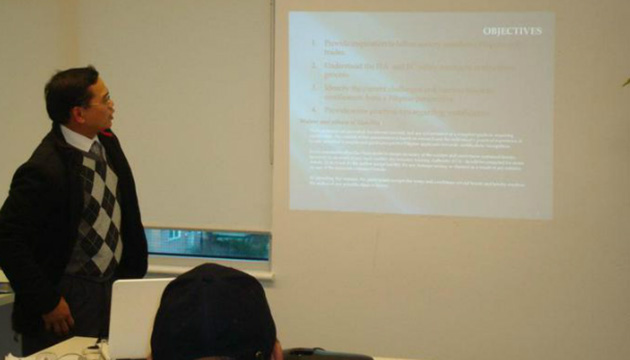 "As a landed new immigrant, I had difficulty finding a job aligned with my education and work experience. I was frustrated and didn’t know how to kick start again my career in Canada. I contacted Filipino Canadian Construction Society (FCCS) and requested to be mentored. I asked what are the options for me to be a registered professional engineer or an applied science technologist.

They mentored me in the different options.  I now understand the certification process and am more confident on what to do. They gave me the hope and inspiration I need to pursue my certification."
Wilfredo Lim, an industrial engineer, joined FCCS as a mentee, 2016

FCCS founder Amado Mercado explains why he started the organization: "The purpose was to organize Filipino Canadian professionals and trades people in the construction sector to have a stronger voice in the Canadian construction industry. Another purpose was to share talents and skills, to help members achieve individual success in their respective fields."

FCCS is an entirely volunteer-run program with more than 100 members consisting of mentors and mentees.

The Goal of Mentoring at FCCS
According to Ed Nicolas, a professional engineer and current President of FCCS, the mentoring goals are to equip the immigrant with an understanding of Canadian work standards and labour market; to prepare them for certification and job application; to explore options of being an employee or a businessman; to provide professional and social networking.

"We don't guarantee job placement since we are not a funded immigrant service provider, although we have some successes of getting our mentees to work in their field," adds Nicolas.

More than securing jobs for immigrants, Nicolas explains the power of mentoring: "We provide the gift of inspiration. By providing training, networking or mentoring, we are helping new immigrants to be confident, understand what it takes to get certified and ultimately secure a job in their field. I believe that our mentoring plays a very important role to guide a newly landed skilled immigrant towards success, by sharing the wisdom of experience."

How the Mentoring Program Works
People who want to be mentors or mentees apply to join FCCS as members. Mentoring is provided through a training program where mentors and mentees meet once a month, hold workshops and open forums, and network. One-on-one mentoring sessions may be provided at this time. Topics include challenges faced by mentees, mentors sharing their experiences in handling these challenges, information on electrical certification, welding, estimating, and professional engineering. The average number of participants in the workshops is six to 10 people.

The mentoring starts with a three-hour workshop training, followed by the mentee contacting a mentor for guidance.

The length of time of the mentoring depends on the objective of the mentee. If certification is the goal, the mentoring will require over 3 months. If the objective is to secure a job, mentoring can take as short as two weeks, a month, or as long as needed until the mentee is referred to a job or gets a job. As some members of FCCS are construction entrepreneurs themselves, some mentees are hired by members.

Some success stories
An electrician - Carlos Pineda - asked to be mentored to be an electrician in B.C. An FCCS mentor, met one-on-one with Pineda, discussed different topics related to Canadian standards and reviewed sample documents. Later, when the mentor needed an electrician, he hired Pineda.

Another example is Jojo Conanan, a civil engineer from Singapore, who arrived two years ago. He met with FCCS mentors and discussed how to be certified. The result is that Conanan enrolled at BCIT to take the building code program, and is on his way to certification.

In 2015, FCCS received the Professional Immigrant Network Leadership Award from the Immigrant Employment Council of B.C.

Expanding Services
FCCS currently mentors mostly Filipinos. They have now expanded to mentoring immigrants in industries other than construction.

FCCS has begun fundraising to support 10 scholars in the Philippines.