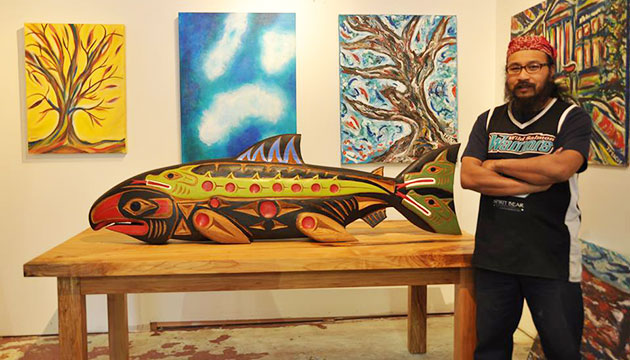 Jay Peachy discovered art and reconnected with nature during the darkest days of his life.

Driven to madness by a toxic corporate world, Peachy lost almost everything. He emerged stronger, and now, he’s a committed advocate for mental health.  His reconnection with nature also enabled the Coquitlam, B.C. native to learn more about aboriginal life and culture in the west coast, which are intrinsically linked to the water and the iconic salmon.

Affinity to the water is in his genes. The son of Canadian Filipinos related in a previous TV interview that his mother hailed from a coastal region in her native country.

“I am a contemporary outsider artist that believes in the healing properties of the natural environment,” Peachy states on his gallery’s website.

“I paint landscapes in abstract as an expression of my connection with nature and its ability to provide me peaceful inspiration. As organisms on this earth I believe we are interconnected with nature and highly interdependent,” the artist added.

Peachy’s works were on exhibit at the Gallery at the Artisan Square on Bowen Island (589 Artisan Lane) from April 29 to May 23, 2016. The solo exhibition called Movement(s) is presented by the Bowen Island Arts Council (BIAC).

Among the features of Movement(s) were two installations, Salmon Van and Mc Diagnosis.

Salmon Van uses the movement of salmon schools as an alternative narrative in building social relationships. Mc Diagnosis is a critique of the cookie-cutter approach towards mental health diagnosis.

Peachy said: “Both installations, inspired by an indigenous people's way of thought, have a root in movement that seek to be portals to a way of living and connection, which is rapidly fading in a
hyper-accelerated media saturated modern world.”

Gallery curator Janet Esseiva said that visitors will be treated to something very special, which will “definitely challenge and provoke thought and stimulate their senses”.