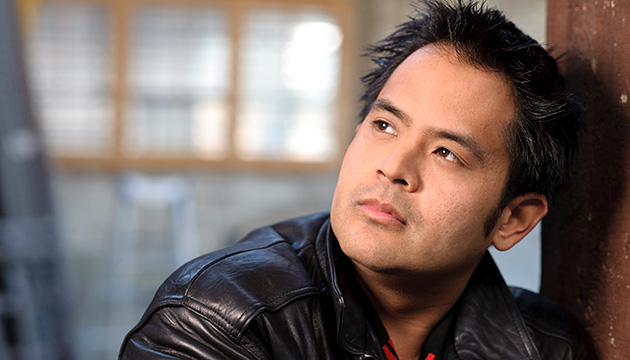 “Underneath the layers of self-hatred that Filipinos as a people have accrued thanks to century upon century of colonization, we have agency - fierce agency - and much wisdom and beauty to offer. The world - and that includes Filipinos themselves - need to really SEE the many different shades of the Filipino face.” – C.E. Gatchalian

Canadian Filipino author C.E. Gatchalian’s objective as a writer is to be the voice of racialized folks. To be able to share stories that the mainstream society hasn’t given visibility to and take his audience beyond their own immediate milieu.

The Vancouver-born playwright’s works, Falling In Time, Broken, Motifs & Repetitions and People Like Vince, have appeared on stages nationally and internationally, as well as on radio and television. A recipient of the Dayne Ogilvie Prize in 2013, awarded annually by The Writers' Trust of Canada to an LGBT author of merit, and two Jessie Richardson Awards for his work as theatre artist and producer, Gatchalian clearly established himself as a notable artist behind the scenes. Currently, he is also the Artistic Producer of the Frank Theatre Company.

Gatchalian was born to write. Growing up as a shy, introverted child, he found refuge in books that offered him both an escape and a reflection of his own inner life. “Books allowed me to see myself in other characters, so it gave me confirmation of my own existence, my own humanity,” said Gatchalian. He had this immediate respect and admiration for what writers did and what they created at such an early age. Gatchalian started writing stories at six years old, so young but already wanting to offer the same inspiration to his readers. For someone with a literary gift, he was good at it right at the get-go.

Gatchalian believes that his artistic practice is based on complete presence and openness. “I try not to overthink the creative process. It’s about bracketing your ego and being totally present, allowing yourself to be vulnerable, and being totally open to energies both within and without,” said Gatchalian who usually gets his inspiration from books, music, films, visual art, politics, what’s happening in the world, the other souls that populate this planet, nature, life - everything.

He also believes that writing chose him. “I have chosen a path that runs counter to the objectives of mainstream society, which is governed wholeheartedly by capitalism, by neoliberalism and by the market economy,” said Gatchalian. Finances have always been his biggest struggle as a writer and as a citizen and so he will always fight for better compensation for artists even though he doesn’t expect art to be a lucrative endeavor. His primary goal is to question and destabilize the status quo. As for the spiritual rewards of being a writer and an artist, for Gatchalian, it is immense. What keeps him going is the ability to challenge people’s deeply held, underlying and unquestioned assumptions about everything and reveal aspects of humanity’s collective truth that the social order prefers to keep hidden.

As a Canadian Filipino, Gatchalian finds himself becoming more and more Filipino as he gets older and wiser. He sees more clearly how white supremacy seeps into virtually every aspect of our lives as citizens of this society. “We need more nuanced, more complex artistic representations of Filipinos. The nannies, the singers, the nurses, the boxing champions that people know Filipinos as have complex stories and lead complex lives,” said Gatchalian. “We are also lawyers, doctors, engineers, intellectuals, activists, teachers, writers. We are female, we are male, we are every gender in between. We are queer and we are straight. We are conservative, and we are radical.”

Catch C.E. Gatchalian on a two-part workshop series on creating literary works about identity on December 1 and 10 at Historic Joy Kogawa House in Vancouver, B.C starting at 1 p.m.

Gatchalian emphasizes, “Regardless of what level people are at in their writing, my hope is that people will come out of these workshops with less fear about writing their truth. The best writing happens when people just write their truth without fear of how others will respond to it.”

More information about the workshops:
http://www.asiancanadianwriters.ca/2017/11/a-workshop-series-with-ce-gatchalian.html