Karon Liu is a Toronto-based food reporter with the Toronto Star.

On October 6, 2022, the paper published Liu’s list of must-eat restaurants in the city, and one Filipino-inspired establishment made the cut.

It’s Mineral, which Liu described as a bistro located at 1027 Yonge Street, and “best suited for date nights or a solo treat at the bar”.

“Chef Danny Cancino first caught the attention of diners when he brought kamayan dinners to Queen West at the now-closed Filipino restaurant Lamesa almost a decade ago. His cooking at Mineral is hard to categorize in one word. Cancino, who has a Filipino background, picked up European cooking techniques in culinary school and then worked in different kitchens in town before running his own,” Liu wrote. 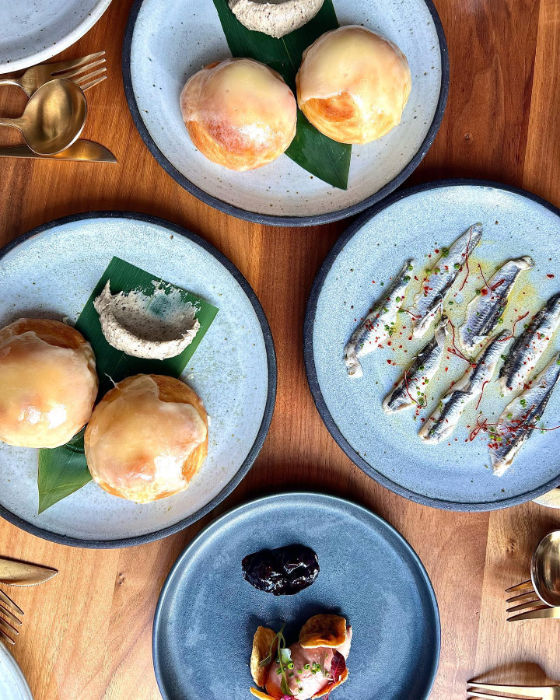 A side of foie gras, iberico soppressata or white anchovy is available with Mineral’s ensaymada (brioche buns). Photo by Mineral.

Cancino was born in Hong Kong, and lived in Manila as a young boy until the family moved to Canada.

Canadian Filipino Net took a look at Mineral’s menu, and one of the featured items is Tuna Kinilaw, a Filipino version of ceviche. Cancino marinates his fish with blood orange marinade, and it’s served with avocado and crab chips.

What caught Liu’s eye was Cancino’s version of the ensaymada, a Filipino brioche.

Liu related that Cancino adds truffle butter and hojicha honey to his ensaymada, and for an extra fee, diners can add foie gras or soppressata, a type of cured meat.