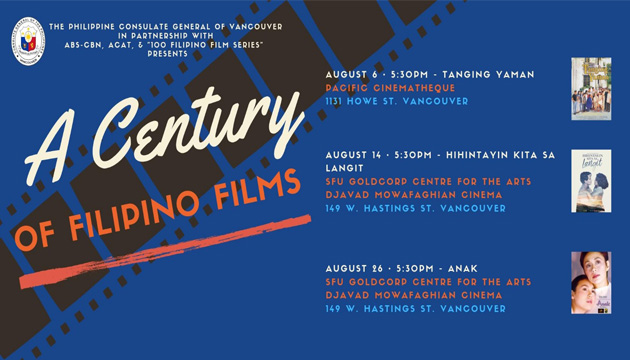 The Philippine Consulate General in Vancouver is organizing A Century of Filipino Films, in partnership with the ABS-CBN media network in the Philippines, and two Vancouver-area-based entities, the Anyone Can Act Theatre (ACAT) group, and the ‘100 Filipino Films Series’ project.

Canadian Filipino Net is sharing the following media release about the festival:

A special Film Festival comes to Vancouver! Did you know that Filipinos have been producing films since August 1919, a hundred years ago? We want to bring Philippine cinema to recognition (its artistic, and film-making merits), and the growing issues that are at the heart of a Filipino wherever they are domiciled. This commemoration includes a three-pronged celebration - the centennial of the first Filipino film (Dalagang Bukid Sept1919), the National Language Week (Linggo ng Wika), and the honouring of Mel Tobias (Filipino-Canadian movie/art critic and renaissance man) by the city of Vancouver.

The films are chosen to emphasize firstly Filipino Cultural values, the beauty of our Motherland, good artistic and film-making merits. The films, dates, venue will be as follows:

The three films (with English subtitles) have been restored as part of ABS-CBN’s “Sagip Pelikula” (Save our film) to preserve our heritage. The “Sagip Pelikula” initiative started in 2011, has recently gained international recognition, winning the 2019 IABC Gold Quill Award. This award held in Vancouver in June of this year gives global recognition to excellent business communication programs and it is one of the most prestigious awards programs in the industry, recognizing communication work from around the world that soars above the average, taking communication to new heights.

“As a Filipino, I watch Tagalog movies to remind me of my origins, to be entertained and informed, and to nurture the reflections of Philippine humanity on celluloid. Films mirror the many and varied aspects of Philippine life; they are a window to my country, its people and myself.” - Mel Tobias

Included themes are various aspects of the Filipino experience: cultural family values are challenged and eventually triumph amidst the chaos caused by the family matriarch’s dementia (Tanging Yaman or Cherished Treasure); a Filipino interpretation of the international love story classic Wuthering Heights (Hihintayin Kita sa Langit or I will wait for you in heaven)) amidst the spectacular landscapes of northern Philippines; and the tragic plight of a Filipina overseas caregiver who loses her family’s affections because of the long separation from family and fights to get it back upon her return home (Anak or Child) featuring the world-famous song “Anak” which has been transcribed globally.

These are FREE events. However, for control purposes, please register at EventBrite https://www.eventbrite.ca/edit?eid=64709643285

There will be a reception preceding the first film showing (Aug 6), and a panel discussion after the last (Aug 26) aimed to engage in a discussion and reflection on the merits of Filipino film-making and aesthetics, culture, pressing issues and conflicts faced by every Filipino and mostly the impact on exiled Filipinos whether it’s by choice or by necessity.

Philippine Consul General Maria Austria stated, "There is so much of our culture that we want to showcase in Canada - our shared values, our tradition, our scenic location, and the artistry and technical skills of Filipinos. We hope to be able to raise the profile of the Filipinos, as well as remind Filipinos living in Canada of their heritage."

Dodie Lucas, who facilitated the license from ABS-CBN said, “When Canadians of all cultures watch these movies, they will see how the Filipino film has matured over the years. We invite Vancouverites to see these films.”