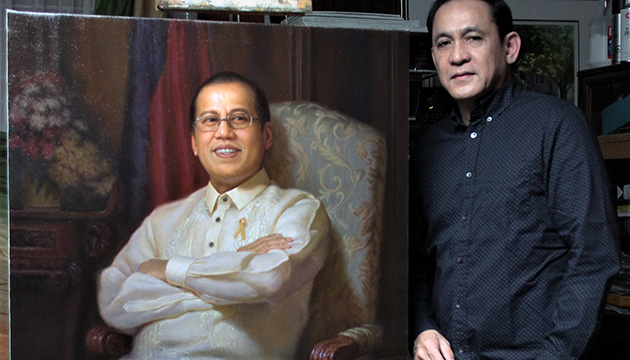 In 1989, to commemorate the visit of then Philippine President Corazon Aquino, the Vancouver, Filipino community gifted the late president with a life-size oil portrait done by Canadian Filipino artist Edgardo S. Lantin.

Lantin, who was then relatively new in portraiture, basked in the limelight when the visiting president graciously accepted the gift. “The portrait was a labour of love, at the same time a big challenge for me,” the artist said of his work now displayed at the Malacanang Museum.

He devoted 10 hours daily for five weeks on this masterpiece. Lantin laughingly recalled that he was rendered speechless when he met Mrs. Aquino at the gala event given in her honour.

Twenty-seven years later, the now-renowned portrait artist is back in the spotlight with another work of art, this time of Mrs. Aquino’s son, former President Benigno “Noynoy” Aquino III. The art piece now hangs alongside official portraits of Philippine presidents at the Malacanang Reception Hall.

“This was a commissioned 32” x 42” portrait in oil. I received a long-distance phone call in 2016 from an aide of PNoy, and that same month, I dropped everything and went home to the Philippines to discuss the dream assignment. Unfortunately, PNoy had no time for a photoshoot so I was given several photographs to work on.”

Lantin began the process of portraiture by thoroughly studying his subject “in order to gain a feel of the person.” He watched videotapes, browsed the Internet and read everything online for a comfortable portrayal.

His insights into Aquino’s character are what make this a compelling piece of realism and impressionism.

“I must be sensitive to the subject and present him at his best. I like to express a sense of drama and I pay close attention to composition, rhythm, and depth.”

Lantin’s commitment to his art is revealed in the finished work.

The portrait shows a smiling Aquino wearing a Barong Tagalog with the trademark yellow ribbon pinned on his chest, and his arms crossed while seated against a dark background. Soft, white light flows and bathes Aquino’s mixed expression of pride, dignity and contentment.

With his brush strokes, carefully mixed complexion tones, and unique interplay of light and shadow, Lantin’s work depicts a charismatic president proud to lead a nation.

Together with his family, the migrant from Lipa, Batangas moved to Canada in 198, after finishing a degree in Advertising from the University of Sto. Tomas College of Fine Arts. In Vancouver, he first worked as a graphic artist for Agent Canada, a tourism magazine for travel agents. He also did free-lance cartooning on the side, for local newspapers.

His interest in painting was rekindled when he met Canadian-Filipino impressionist Sofronio “Sym” Mendoza, who later became his mentor and was pivotal in shaping Lantin’s artistic growth.

Later, he joined Dimasalang III, a group of CanFil artists founded by Mendoza. They regularly come together for group paintings, workshops and exhibits.

Despite what he considers a late start, Lantin was determined to push his limits. He was granted a scholarship by the Art Students League of New York. At that time, he honed his skills in drawing under famed New York artist Michael Burban; painting under figurative painter Harvey Dinnerstein; and anatomy under Elliot Goldfinger, a realistic sculptor and instructor of human and animal anatomy.

Shortly after his return to Vancouver, he devoted time to building his portfolio. “My wife, Cathy, a pharmacist, fully supported me.” Lantin points to a portrait of his wife leaning against a wall in his studio. He jokes that every time he feels like slacking, her piercing eyes compel him to work some more.

With Cathy as his inspiration, Lantin was able to produce exquisite landscapes, seascapes, and nature studies. He has won several awards, including the grand prize in the Federation of Canadian Artists in Vancouver and the “Best Portfolio Award” by the Portrait Society of America.

Nowadays, he is kept busy by commissioned portraits and divides his time between Manila and Vancouver, B.C.

Finally convinced that he made the right choice in making a career out of painting, Lantin proudly showed off unfinished works of famous people, from taipans to politicians--incontrovertible proof of his success as an artist.