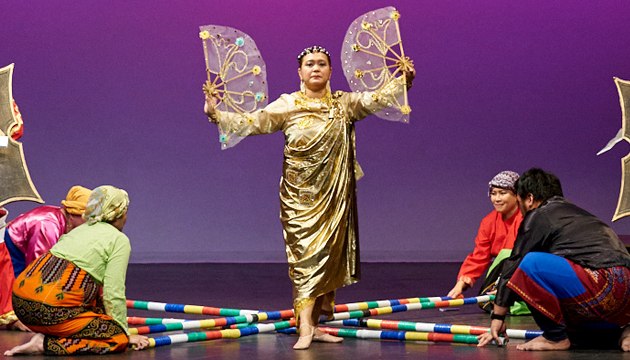 “Pride” and “amazing” were the most common responses from members of the audience when asked what they thought and felt after watching Balik Bayan, a program of song, dance and narration staged by the Filipino Canadian members of Victoria and Vancouver Island

on November 19, 2022 at the Dave Dunnet Community Theatre of the Oak Bay High School in Victoria.

For two hours, Victoria’s Bayanihan Creative Collective, entertained the audience with dance numbers from the Cordillera region of northern Philippines, the lowlands of Central Luzon, the Bikol Region, the Visayas, and Muslim Mindanao. The Collective is composedof  male and female members of the Sampaguita Dancers and Choral Group including children.Individual members of the Filipino-Canadian community of Victoria and members of the Vancouver Island Cordillera Association also contributed their talents.

“I am so proud to be a Filipino after watching this. Our culture is so rich and so diverse,” said one Filipino Canadian. “I had to hold my breath there a few times - those were tricky dance moves!” said a Canadian newly introduced to Philippine song and dance.

A First Nations elder noted: “That was so professional.  They could easily have charged more (than the $15 admission).”

Balik Bayan marked the 21st anniversary of the Bayanihan Community Centre of the Bayanihan Cultural and Housing Society (BCHS) based in Victoria, British Columbia. The BCHS was incorporated in 1991 and acquired the Centre in April 2001 which is located on Blanshard Street. Dominga Passmore is the current president of BCHS.

The Centre has served as the venue for many activities sponsored over the years by the BCHS and other FilipinoCanadian organizations for the purpose of fostering a knowledge of and pride in the Philippine heritage among FilipinoCanadians,   providing a safe space for Filipino Canadians to gather and celebrate, showcasing FilipinoCanadian talent; participating in community and relief efforts, and introducing the larger community of Victoria and Vancouver Island to Philippine culture,foodand traditions.

On November 19, performers of all ages stamped their feet, swayed, teetered on benches, jumped between bamboo poles, leapt with swords, flicked their ankles, balanced various objects as they gave expression to more than 15 dance numbers.

The dance and music numbers were presented in the context of a mother introducing her two daughters in Canada to Philippine culture while packing a Balikbayan box full of goodies to send to the Philippines. The Balikbayan box represents the continued connection that Filipinos abroad feel for their homeland, the duty of care for family and friends and the celebration of ties that bind.

Women  dressed in the traditional costumes of the Mountain Province danced to the beat and melody of Salidumay. Little children imitated seagulls in the Lapay dance from Masbate and playfully dueled with sticks in Sakuting. Their teenage brothers and sisters tried not to fall as they danced on benches in Sayaw sa Bangko while their mothers, aunts and grandmothers reenacted, through the Bulaklakan, the floral tribute given in towns across the Philippines in May in honor of the Virgin Mary.

The Visayans, known for their gentle speech and languid manner, were represented by the harvest dance Lawiswis Kawayanand the flirtatious Aray, a courtship dance with clear Spanish influences. Dancers warded off evil spirits with the bamboo tubes of Karatong, and delivered a rousing Tinikling that had the audience standing and cheering the dancers as they sidestepped the clash of bamboo poles. The popular tinikling is sure to keep one in awe as bamboo poles threaten to clip dancers' legs. Photo by Jun Tanquilut.

The highlight of the evening had to be the stately and suspenseful Singkil, a royal dance from the Darangen, an epic song of the Maranao people of Lake Lanao, Mindanao, showcasing the rescue of Princess Gandingan by Prince Bantugan, who was held captive by the diwata. A close second would be the Pangalay, a traditional dance from Sulu in Mindanao that closely resembles Thai, Cambodian, Burmese and Javanese classical dance. The Higaunon Suite of the Indigenous Lumads showed dancers in prayer and in battle, as well as imitating nature and driving evil spirits away.

Balik Bayan showed not only a rich variety of dance moves and music styles but also a wide array of Philippine costumes, fabrics, colors and accessories - like hats, scarves, adornments, and musical instruments. The audience was treated to a sweep of the Filipino temperament and Philippine rituals, showing Filipinos asking for divine assistance, fighting evil, celebrating, flirting, having fun, and enjoying nature.

The show would not have been possible without the leadership of Jean Graciela Enriquez-Peñola.  Jean was born in Parañaque, Metro Manilabut raised in Iligan City, Lanao del Norte and serves on a part-time basis as dance instructor and coordinator of the Bayanihan Community Centre. She is the Communications and Outreach Manager of the Resilience BC Anti-Racism Network Hub.

Assisting her in the direction and choreography of Balik Bayan was her husband Geoffrey, an engineer and resident member of the Integrated Performing Arts Guild. They were joined onstage by their daughter Sam Peñola, who also sings with the Bayanihan Centre choir.

The choir is led by Ruby Tiburcio Llaguno, a graduate of the Philippine Women’s University who has a master’s degree in Music specializing in Voice from California State University.  Equally vital to the success of the show was Clarissa "Issa" Mijares, a Victoria-based performing artist, teacher, and dance anthropologist who is currently doing her PhD at Simon Fraser University. Clarissa works especially with the children and youth of Bayanihan.

Meyen Hiponia Quigley is a Filipino Canadian living in Victoria, BC, originally from Iloilo, Philippines. She has been working as a communications analyst for the British Columbia provincial government for many years.