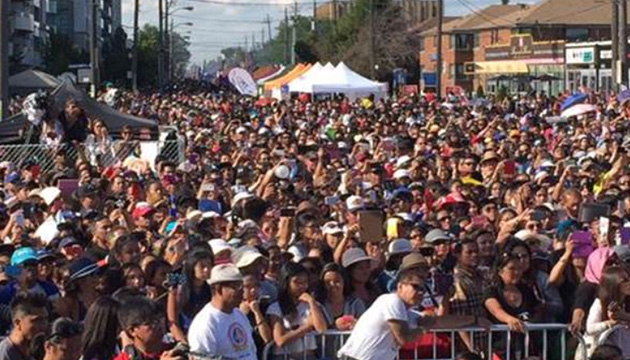 It’s billed as the biggest Filipino street festival outside of the Philippines, and it’s undoubtedly a source of pride for Canadian Filipinos.

The 2018 Taste of Manila happens on August 18 and August 19 at Bathurst Street in North York, an area known in the Greater Toronto Area as Little Manila.

This year’s celebration will be the fifth, a milestone for the event’s organizers.

The popular support for the Toronto festival has surprised even its organizers, who expected only a few thousand to show up at its inaugural event in 2014.

In that year, 60,000 visitors came, and the attendance kept growing in succeeding celebrations.

In 2016, no less than Prime Minister Justin Trudeau came, joining around 350,000 guests in the two-day festival.

Taste of Manila showcases Filipino food and culture. It also serves as an occasion to present Canadian Filipino talents in the entertainment field.

The festival is a project of the Philippine Community Cultural Centre.

“The Taste of Manila will endeavor to promote tourism and remain as a cultural window into the heart and spirit of the Canadian-Filipino community,” according to the event’s website.

This year’s celebration was almost derailed after organizers found out that escalating costs for policing, waste management, and other requirements have outstripped their ability to raise funds.

On July 30, Toronto Mayor John Tory called for a meeting with Taste of Manila organizers and city councillor James Pasternak, who represents York Centre, home of the festival.

The City of Toronto extended help, ensuring the festival marks its fifth year this summer.

Tory said in a statement: “The moment I heard that the Taste of Manila was being cancelled, I started looking for ways to help and to get the festival back on track.”