The members of Dimasalang III International Artists Group, orphaned by the passing of SYM Mendoza  last  year,  are regrouping to carry on SYM’s legacy  by  putting on canvass  all that they had  learned from him in  years past.

They are joining the BC Ugandan Resettlement Committee  in an art exhibition  at the Roundhouse in Vancouver curated  by Taslim  Samji. 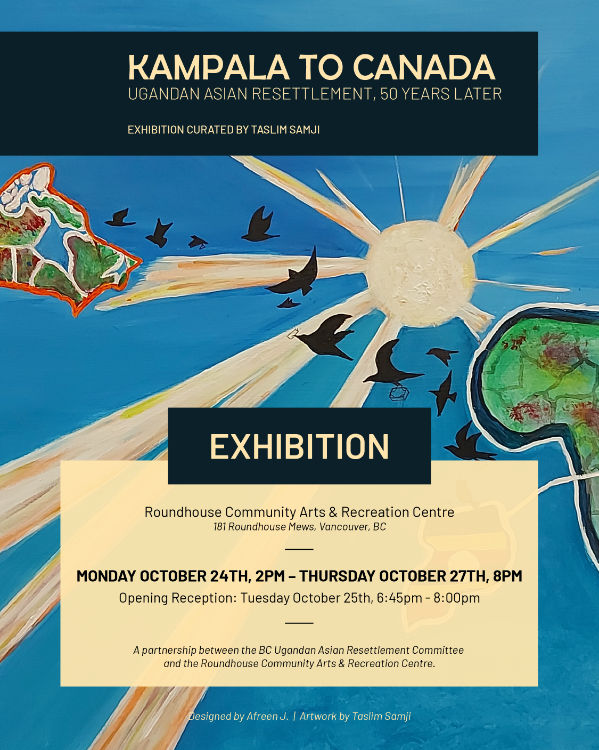 The Vancouver show runs from October 25h to October 27.

The three-day exhibition runs October 25th through 27th at the Roundhouse Community Arts and Recreation Centre in  Vancouver. The Opening Reception is on October 25th from 6:45pm to 8:00pm.

The exhibition titled “Kampala to Vancouver” commemorates   the 50 years of Ugandan Asians resettlement in Canada after they were forced into exile by President  Idi Amin in 1972.  Thousands  of Ugandan Asians whose ancestors were originally from India and Pakistan arrived in Canada, penniless and uncertain at that time.  Since then, they have given back to Canada - economically, socially, and culturally.

“We have profiled several Ugandan Asian Canadians in the exhibition. They are among land developers, hoteliers, entrepreneurs, educators, doctors, all of whom call Metro Vancouver home; they are generous supporters of community and social initiatives with their time and resources,” said Samji, the curator.

With over 40 Canadian artists taking part in this exhibition, from Uganda, Iraq, Philippines, Malaysia, China, Kenya, Tanzania, Afghanistan, India and Pakistan, there are many stories, perspectives, and expressions to be shared, explained Samji.

The Philippines is represented in this exhibition by the Dimasalang III International Artists Group. Displaying their works are: Bert Morelos, Noel Trinidad, Antonio Dizon, Charlie Frenal, Francis Herradura,  Mary Ann Manuel, Norman Belen, Juliana Loh,  Reynato Pablo, and  Leo Cunanan, Jr.  They are proud to display  SYM’s legacy at this art exhibition to show that their maestro’s ideas of beauty continue to live on in Canada.