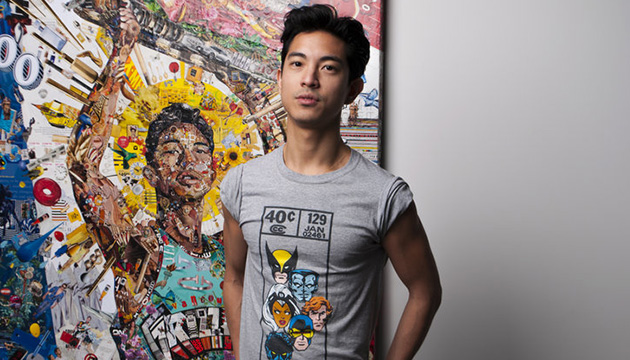 Canadian artist Jay Cabalu finds his Filipino identity through collaged self-portraits. One such portrait is on display at Vancouver’s Spencer Interiors titled “De Los Reyes”, after his mother’s maiden name.

Cabalu describes the portrait: “I thought about the struggles my family experienced moving to a new country and starting over in a place where they felt they were outsiders. I thought of my mother, Maria Bernardina De Los Reyes Cabalu, who went from being a stay-at-home mom for 12 years to working at Wendy’s for over 20.”

Cabalu moved with his family to Vancouver 30 years ago and has since struggled to fit into this new western world. “During my childhood and teen years, I collected hundreds of comics and magazines, learning through the lens of something I found fun and inspiring,” recalls Cabalu. From this collection of comics and magazines come the pieces that make up the collage art pieces.

In an interview with Queer Asia, he explained, “When I started pulling from my personal collection to create collaged portraits, my first inclination was to depict celebrities and models. However, as I grew older, this was eclipsed by a desire to represent my adult self as the person I was looking for in the material I browsed as a child.”

As a child, Cabalu watched a lot of television but was constantly searching for himself in the very limited scope of Asian characters.

He remembers seeing a Filipino character playing a caregiver in an episode of The Sopranos. He relates, “At the time I remember thinking, ‘OMG, we’re on TV!’ In hindsight, it confirmed a troubling thought about how Filipinos were seen.”

Spencer Interiors approached Cabalu to create a large-scale piece. Entering the store, he thought, “This is not my Vancouver.” The experience of being in a high-end furniture showroom brought back memories of having to leave an apartment in the West End that he has lived in for 10 years to make way for new development. He realized that there was an opportunity in this realization.

“Artists have the privilege of being able to transform their struggle into a beautiful, tangible thing. This is my Vancouver. I see symbols of privilege all around me, and as a gesture of resilience and recognition of the struggles that outsiders face, I raise mine - this symbol of Filipino pride.”

Cabalu is a graduate of Kwantlen University’s Fine Arts program and has exhibited with the Foundation for Asian-American Independent Media in Chicago and Queer Asia in London, UK.

“De Los Reyes” is on display in Spencer Interiors on 708 Main Street in Vancouver. Cabalu’s other pop surrealist portraits include “The Count of Monte Christo”, “Reconciliation” and “Vortex”. To view more of Cabalu’s work, visit http://jaycabalu.com/